After tonight, in which a football game was played between students from West Virginia University and the University of Miami, both my brain and my heart are very much hurt. Not because of the outcome. Not even close. I am very much used to the Mountaineers letting me down. And I can take solace in the fact that we actually overachieved this year by winning 10 games and spending bowl season in a tropical climate instead of an arctic one such as our old rivals from the north. No, I am saddened, disgusted, and overall disappointed in the fact that we have the absolute dumbest, nastiest, and misguided fan base in the country. They don’t understand competition and they don’t understand what college athletics is about.

I played college baseball. We won like 60% of our games. We never won a Big East championship. We never made it to the NCAA tournament. That means nothing.

I made life long friendships. I competed with my teammates. I had bad days and good days. Shed blood, sweat, and tears with my guys. Learned a ton about life. And I got my degree from West Virginia University. That means everything.

Did I care what someone who wasn’t as athletic as I was said about the way that I played or the outcomes of our games? No. I cared what my teammates thought and that was it. And for good reason.

Now I have sat through over 200 WVU football games and probably twice as many basketball games. Watched the rest on TV or even listened on the radio back in the day. I have had outbursts and obscenity laced tirades. I have been mad, sad, and overjoyed. I have called out players at games for making mistakes. But never, have I ever seen the type of simple minded reactions that I have seen tonight.

Fuck off n don't let the door hit u on the way out https://t.co/mNIpVSCk8p

Yes for real he is a fucking faggot and he sucks https://t.co/EfsBaMc7NQ

@altemus13 once again I don't pay to watch players get degrees I cld not stress how much that means nothing to me enough. Win fucking games 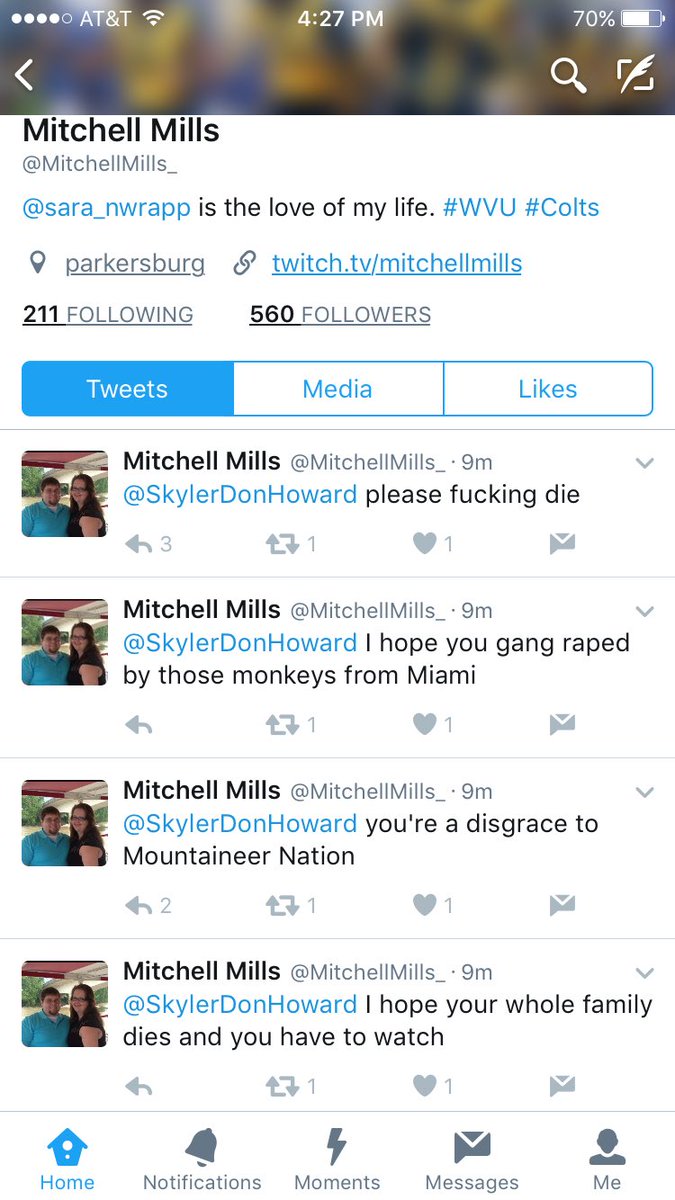 Keep in mind that this is only two examples of what is out there but if you do a little digging, you will find countless terrible reactions just like this. This is exactly why we deserve all of the negative media attention and stereotypes. Our fan base cannot think rationally. They cannot handle themselves in a manner that is fit for today’s society. When we treat our own guys with this level of disrespect every single day despite the fact that they chose to come here. They chose to work as hard as possible to play well and win. They chose to get a degree from our school. And our “fans” treat them like livestock. I mean, truthfully, in the grand scheme of things, this game meant NOTHING. If we win, we get to 11 wins. Great. But would anyone be talking in depth about our prestigious Russell Athletic Bowl win? Probably not. Would have been nice. Didn’t happen. And yet, these are how people who cal themselves Mountaineer fans are handling it. Why would any high school kid want to come to Morgantown? All they have to do is look at how our fan base acts on social media for 5 minutes before running the other direction. This is an absolute disgrace. We should all be ashamed for allowing this type of behavior. Nobody who acts like this should allowed to ever wear the gold and blue.

I hope karma is real. I hope all of our internet tough guys get what is coming to them. Years and years of unemployment and infertility, hopefully in a country far far away that has no internet access.