Best chance to beat Bama? Why not Washington?

Most of the country seems be treating the Tide’s inclusion in the Final as a formality, but don’t sleep on their semifinal matchup with the Huskies.

A noticeable amount of the CFB Playoff conversation that I’ve seen recently has centered on whether Ohio State or Clemson has a better chance against Alabama in the CFP Title game. People seem legitimately excited for either option, but both Vegas and the general consensus are favoring the B1G’s pseudo-champion Buckeyes (thank god the Committee had the foresight to include them). Not too many people seem to be entertaining the notion that the team with the best chance might just be Washington.

The Huskies received criticism and were widely disregarded as serious title contenders for much of the season due in large part to an abysmal out of conference schedule. And those accusations hold water. Rutgers, Idaho, and Portland State have a combined record of 13-22 and would probably have a hard time scraping together a competitive P5 team between them. However, I think that narrative has overshadowed another potentially more important narrative: the Huskies have smashed just about everyone else that they’ve played.

Take a quick glance through their results this season: 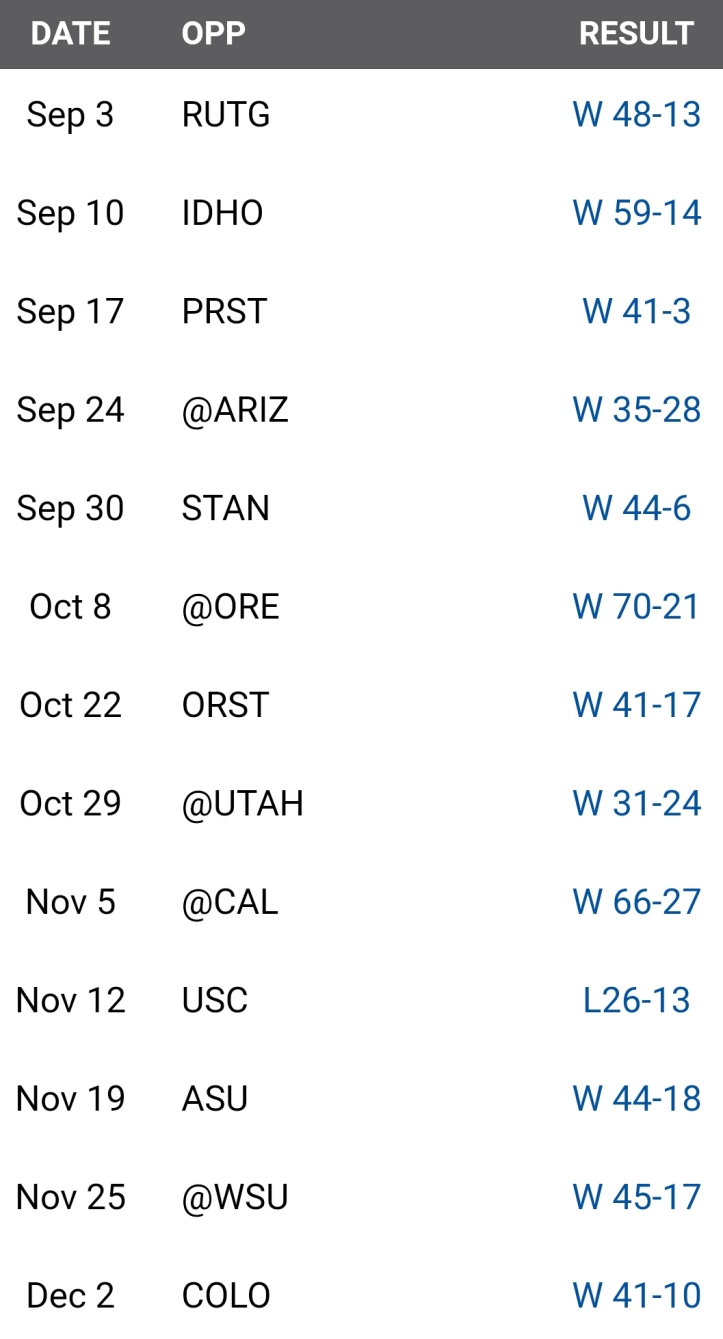 Pretty impressive, right? 44-6 over #18 Stanford, 70-21 at Oregon, 45-17 at Washington State, 41-10 over #10 Colorado. A tough win at #19 Utah. I won’t make the argument that rest of their opponents were a murderer’s row, but isn’t one of the most commonly used clichés you hear about great teams that they destroy bad teams? Haven’t the Huskies done that? Their 10 wins by two or more touchdowns trails only Alabama’s 11 nationally, and their only loss came at the hands of a USC team that the talking heads have been slobbering over for the better part of two months now. They’re a damn good football team, and there’s evidence out there that the Alabama matchup should be viewed as anything but a foregone conclusion.

For example, let’s look at how the Dawgs stack up in a couple of my favorite advanced metrics, Toxic Differential and something I’m calling Net Rating. I actually have a couple of articles in the works that’ll go into more depth on both, but for now some quick definitions will have to suffice. We’ll start with the latter.

Net rating is based on the NBA metric of the same name, and is calculated as points scored per 10 possessions used (O rating) minus points allowed per 10 possessions faced (D rating). In my model I calculate possessions used by adding up the number of touchdowns scored, field goals attempted, punts attempted, turnovers lost, turnovers on downs, and safeties conceded (simply flip everything to calculate possessions faced). It’s important to note that this doesn’t account for clock kills or garbage time scores, but it gets us close enough to get an idea.

Washington ranks 4th nationally in offensive rating with 36.8 points per 10 possessions and is 11th in defensive rating with a stingy 14.2. Most impressive though is that their 22.6 net rating is also ranked 4th, sandwiched between Ohio State in 3rd (22.8) and Alabama in 5th (22.2). It’s also notable to mention that after Bama there’s a 4.1-point drop off to Clemson in 6th, which is the same as the gap between Wisconsin in 13th and Iowa in 36th. Take that for what you will, but it seems to me that there’s a pretty clearly defined Top 5 (rounded out by Michigan and Western Michigan at 1 and 2) and Washington is most certainly a part of it.

Now for the former. Toxic differential is calculated as the number of big plays your team generates minus the number they allow plus turnover margin. The model I use defines big plays as a runs of 10 or more yards and passes of 20 or more yards, and if anything it likes the Huskies even more than net rating.

Washington generated 134 explosive plays this year (87 runs, 47 passes) and allowed only 76 (43 runs, 33 passes) for an impressive +58 big play differential, but adding in their NCAA-leading +21 turnover margin is what really puts them over the top. That +79 Toxic Differential is spectacular, and is only bested nationally by Alabama’s +81. I’ll note here that there’s again a clearly defined elite tier of teams (also including Louisville at +79 and Ohio State at +74) before a big drop-off to the rest of the country, and Washington is again firmly planted in that group.

I know stats aren’t everything, and I know that these aren’t fancy advanced algorithms like ESPN’s FPI or the Sagarin ratings or adjusted S&P. However, I’d also argue that they’re easier to understand and probably just as meaningful because we actually know how they’re calculated and the concepts they represent align with success in an intuitive way (i.e. making more good plays than bad plays usually leads to wins). And Washington is represented very favorably by both.

Now to be very clear, I’m not straight up predicting that this will happen. Eye tests aside, Alabama was very well-represented by these metrics in their own right, and their general excellence this year was such that they’ll have their own section in those aforementioned articles. However, I do feel that it’ll be closer than people think, and think the unthinkable could actually happen if the following goes down:

First, Washington’s offensive line needs to absolutely play their asses off. They looked great against Colorado last week and have apparently performed pretty well all year (20th in ypc, 24th in TFL allowed, 38th in sacks allowed), but Bama’s front 7 is obviously a much different animal entirely. They have 3 dudes projected to go in the Top 10 in May’s NFL Draft and probably a couple more who will get picked, and that’s not even counting the guys who are awesome but too young to leave yet.

The good news for the Huskies is that they really don’t even need to win in the trenches; they just need to hold their own. The bad news is that the only time this year they played someone in Alabama’s neighborhood athletically was against USC, and the Trojans sacked Browning 3 times and held the Huskies to a season-low 17 yards rushing and 4.3 yards per play. And as good as USC is, Alabama is objectively much better.

Second, Jake Browning can’t give Alabama anything easy. They’ve scored 12 defensive touchdowns this year (!!!), and are the absolute gold standard when it comes to turning turnovers into points. We know it’s gonna get scary out there, but he can’t panic and give them an easy one. The punt team and that Husky defense will be his best friends in this game, and I’d imagine that Chris Petersen will be going to great lengths over the next few weeks to make sure he remembers that.

Most importantly though, the Dawgs have to stay true to form with regards to forcing turnovers. That’s been their M.O. all year, and as I mentioned earlier their +21 margin (and their 33 forced TOs) was the best in the country. More interesting though is what happens to the Tide when they’re on the wrong side of the turnover battle.

Some quick research shows that Alabama has lost just 7 games since 2011. Their turnover margin in those games was a combined -13 (-1.9 per game) and they lost the turnover battle outright in 5 of the 7. In the remaining 75 wins they were a combined +50 (+0.7 per game) and only lost the turnover battle outright 19 times. Washington has to win that battle, and maybe even needs a defensive touchdown. Even that obviously won’t guarantee victory, but it’s easy to see that that right there is probably the difference between Alabama mortality and ROLL DAMN TIDE God-mode.

And so that’s my case. Whether you buy in or not is a different story, but I think we can all agree that New Year’s Eve can’t come quickly enough.