Check out my other reviews by clicking the links in the list below. List is my personal ranking of favorite to least.

All photos were taken by myself.

Nationals Park is located in the Navy Yard neighborhood of our nation’s capitol along the Anacostia River. The area isn’t bad, it’s just nothing great. Since the ballpark was built the surrounding area has been getting better due to it being built up. Washington, D.C. is an awesome place for tourists with tons to do, but there isn’t much surrounding the outside of the ballpark. Hopefully that changes as the area continues to grow.

Parking by the ballpark can be easy. Getting there can be rough though with the D.C. traffic. Certain lots can cost you up towards $50 right next to the park. There are a couple garages a few blocks away that cost $20. The ballpark can be accessed by the Metro, which is much cheaper than the parking.

Outside the park isn’t much of a sight. Whenever I first pulled up and parked I had a “This is the park?” type moment. Then again, a 3 hour trip turned into 5 hours thanks to traffic and maybe I was just irritated.

Inside the park definitely has a new feel to it. A cool part of this park is that the main entrance is the center field gate. The center field plaza just inside the gate is where you can find a lot going on before the game. They used to have 3 statues located inside the park but they have recently been moved to the home plate entrance of the park. They should have kept them where they were. There’s a cool bar in center field called the Red Loft Bar that is risen above the seats overlooking the field, similar to the Roof Deck Bar in Baltimore.

There’s wide concourses and tons of food/drink variety. Not much else to ask for from a newer ballpark. They even had plenty of vegetarian options. Ron Swanson wouldn’t approve, but you do you.

Views of the Anacostia River can be found from the concourses behind home plate and along the first base line. If you go into the upper deck you can get a glimpse of the Capitol Building or even the Washington Monument if you are far enough down the line. If you aren’t high enough, you will catch some great views of parking garages just beyond left field.

This park is relatively neutral when it comes to saying its a hitters or pitchers park. At least 335 down each line, around 370 in each power alley, and 402 to center. The wall in right center is 16 feet tall, and consistent at 9 or 10 feet around the rest of the outfield.

The Nationals had their fair share of struggles when they became a team in 2005 but have made themselves a strong National League presence the last few years. They pull solid crowds and the fans are into the game. They were friendly, but some fans got their fair share of heckling in. All in good fun.

The seats are nice and wide and are nicely spaced to give great leg room. Definitely a perk of the newer ballparks. It was tough to find a bad site line and I don’t think there are any obstructed views in this park. 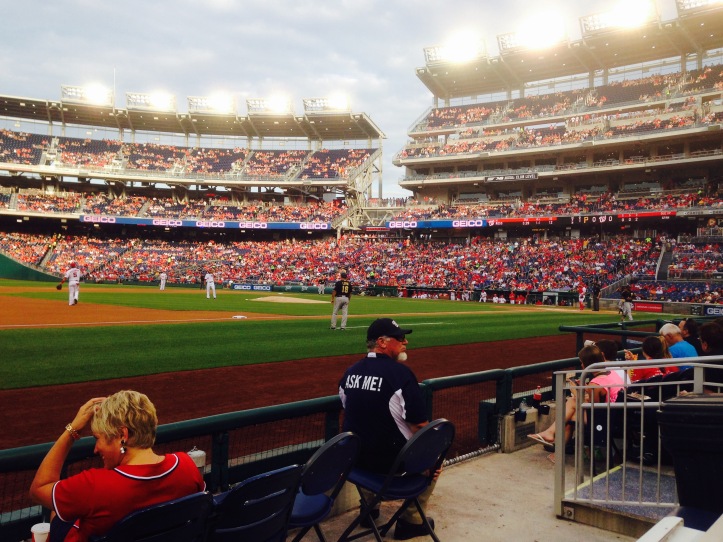 Ticket prices were a little high. Though I did sit down on the third baseline one night and in the club level the next day. The club level was really nice. It was air conditioned and had food options that you couldn’t get anywhere else in the park. Different craft beers were also available. I was 1 out from seeing a perfect game that day. 1 out. Max Scherzer hit Jose Tabata (some say he leaned into it) with 2 out in the top of the 9th. Still saw a no-no though.

Being in Washington, D.C., everything is America themed or red, white, and blue and that was my favorite thing about this park. The famous President’s Race was awesome and fans went nuts to watch the giant head presidents race around the warning track and up towards the first base dugout. Even the mascot is an eagle. There was a designated time during each game where fans would all wave their caps together to show support and appreciation to the military members. America baby.

When it comes to anything unique to separate this park from others, this park just didn’t have it. It was nice and clean but because it is new. It just didn’t wow me in any way or have anything that I’ll really remember or compare to in other parks. I think they really missed an opportunity with this park. I know D.C. is crammed on space, but this park could have been re-positioned to incorporate a better view in the outfield. If the majority of the park had a view of the Capitol Building it would be a different story.

I would have liked to see a little bit more team history throughout the park. I could have missed it, but I would’ve liked to see more references to the Expos history instead of history from previous Washington teams with no affiliation to the Nationals. All I saw of the Expos were named plates behind the plate for Gary Carter and Andre Dawson.

One of the 3 statues at the home plate entrance is of Walter Johnson who was one of the first five elected to the Hall of Fame in 1936. Johnson played for the Washington Senators his whole career, but the Senators moved to Minnesota in 1961 to become the Twins. They focused primarily on Washington history first rather than the franchise history. It’s like the Mets with the Jackie Robinson rotunda. Yeah, he played in New York. Brooklyn to be exact. So they honor him even though he had no affiliation with the Mets. I don’t know. Maybe I’m too picky.

It’s just nothing special for how new it is. They could have made it a lot better. Go see some monuments and learn a little U.S. history as well if you make the trip. 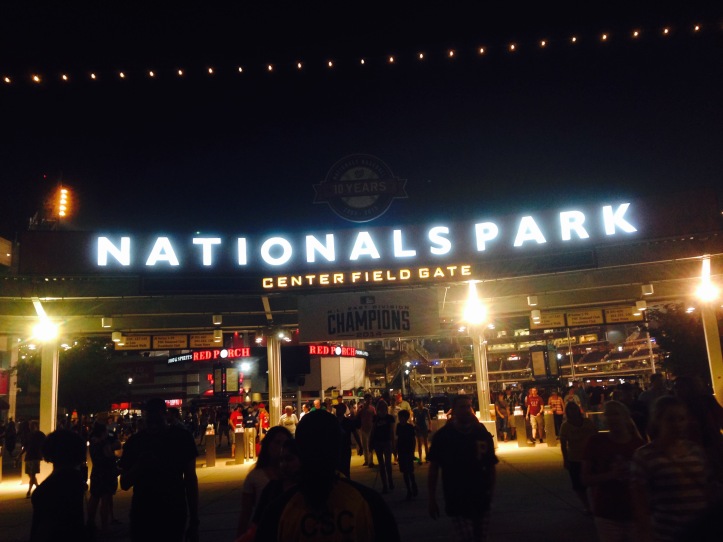