30 teams. 30 ballparks. 26 cities. My quest as a baseball fan to attend a game at each of the 30 Major League parks has been underway for a few years now. It’s on the bucket list for me. Every ballpark is different, and that’s one of the things I love the most about the game of baseball.

I have only been to 8 of 30. Slowly but surely that number is climbing. When I visit a ballpark I like to walk around and see as much as I can to find out what makes that park unique. As I visit, I want to write about what I found at that park along with what I liked and didn’t like about it, then add them to the list ranking them in order of favorite to least favorite.

Check out my other reviews by clicking the links in the list below. List is my personal ranking of favorite to least.

All pictures were taken by me.

The 8th ballpark I got to visit is Citi Field, home of the New York Mets. It opened in 2009 when the club decided it was time to upgrade from the miserable Shea Stadium. It seats 41,922.

When looking into a trip to Citi Field I read a lot about what people though of this ballpark. Lots of people didn’t like it, viewed it as a missed opportunity, and said it was in a rough area.

Let’s start with location. Citi Field is located in the borough of Queens. There is nowhere in New York City to put a new park, so Citi Field was built on the parking lot that was used for Shea Stadium, and the Shea site became a massive parking lot. There are commemorative plaques in the parking lot marking where home plate and the bases at Shea Stadium once were, which is awesome.

The massive parking lot right next to the park is nice and accessible for those who drive to the game, and there is a 7 train Subway station close to the home plate entrance for those taking public transportation. The subway is $2.75 each way and is a 20-30 minute ride from downtown Manhattan.

The rest of the surrounding area was a little interesting. If you went to the Coca Cola Corner in right field (formerly the Pepsi Porch) and looked out of the stadium, you would see a junk yard with old cars and crammed buildings. Not what you want for a family setting, but it can be avoided and you don’t even realize that it’s there.

I love the design of the ballpark itself. For starters, the old home run apple that was located in center field of Shea Stadium is now just outside the home plate gate in the Mets Plaza. Every time a home run is hit by a Met the apple would rise up from its housing and light up in celebration. A new apple is located just beyond the 408 mark in center field inside Citi.

It’s incredible, but it can make you forget that you’re there to watch the Mets. The Dodgers left Brooklyn for LA and Jackie Robinson never had any affiliation with the Mets, but it was easily my favorite part of the park. Attached to the rotunda was the Mets Hall of Fame which had lots of memorabilia/artifacts from the 1969 and 1986 Mets. A must stop when looking around the park.

The concourses were nice and had a new feel to them. They were wide and easy to walk around the park with tons of food options. Citi Field is said to be one of the top ballparks when it comes to food selection and it is quite apparent. I opted for the Shake Shack behind the scoreboard in center field. As for the price, it’s a pro sporting event, so the prices are going to be high anywhere you go.

It was my first Shake Shack experience and it did not disappoint. The skyline above the Shake Shack used to be on top of the old right field scoreboard at Shea Stadium.

After eating I made sure to make a stop at the Shea Bridge in right center field which crosses over the home and visitors bullpens. The bridge honors William Shea who helped bring National League baseball back to the city of New York in 1962. The Dodgers and Giants moved to LA and San Francisco in 1957 leaving the Yankees to be the only NY team at the time.

Shea Stadium was named after William Shea and it is cool to see the old stadium incorporated in so many ways around Citi Field.

The game was a 7:10 pm start on a Wednesday night where the Pirates visited the Mets. It was Jeff Locke vs. Noah Syndergaard. To sum it up quickly, the Mets won 11-2 and Jeff Locke didn’t have a very good day. But the seats we had were amazing. Ticket prices were expensive, but you could find tickets in the 500 level for $7 on StubHub where the face value was over $20. Since it was a one game trip for me I bit the bullet and bought some seats down on the visitors dugout. The seats had plenty of space and even had an in-game wait staff tending to fans within the section. 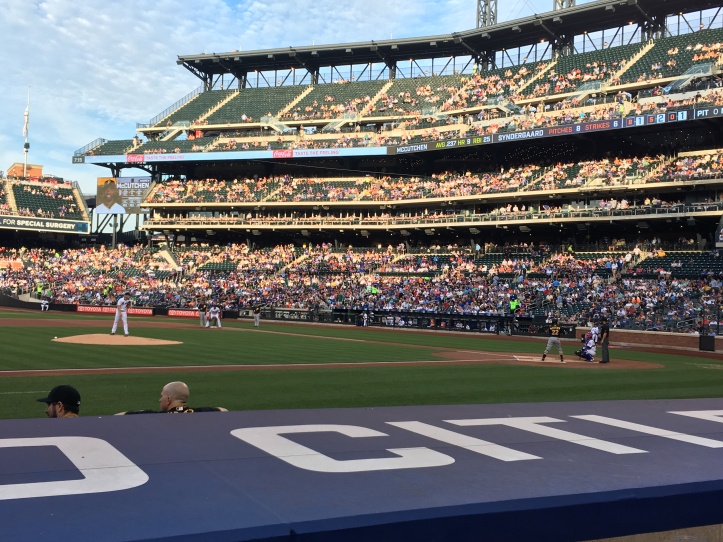 The Mets fans were nice. A winning culture is back for the Mets and they pull a pretty good crowd for every game. It was a late arriving crowd though, which is understandable with New York traffic. The picture above is from the top of the 1st inning. The only fans who were rude were the ones who showed up in the 5th inning drunk then left in the 7th.

The layout of the field is unique and definitely plays as a pitchers park with a big outfield. They’ve actually moved the outfield walls in a few times to try to make it easier for hitters, yet it still plays to favor pitchers. The Coca Cola corner seats in overhang the playing field resembling the old Tiger Stadium in Detroit.

I really enjoyed this park and would definitely like to visit again now that I am a 3 hour train ride away. I rank it #4 out of 8 on my list so far, but it is behind some very good names. Everything was fantastic. I wouldn’t say it was a missed opportunity like some seeing that there isn’t much they could do with location. There was one major downside to this ballpark.

Holy hell. It was a downside with Shea and remains a downside with Citi. La Guardia airport sits right across the Flushing Bay from Citi Field and a damn airplane took off every 1-2 minutes. They were so loud to where I could not hear the person sitting directly next to me. The fans would get distracted to look up and see a massive airplane a couple hundred feet above their heads and then repeat the process again moments later. It definitely took away from the game. 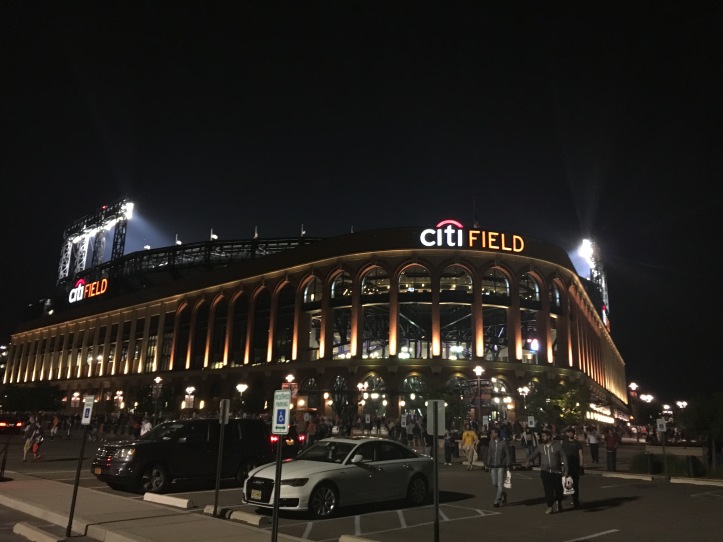