First of a 32-part series forecasting the NFL season.

Offense: Obviously, you have to start with the future of the franchise, QB Marcus Mariota. He had a very good rookie year, throwing for 2,818 yards to go along with 19 TDs and 10 INTs in 12 games. The key here, however, is 12 games. Mariota took 38 sacks (lost 6 fumbles) and suffered a torn MCL at the end of last season. The Titans, predictably, failed to win any of the 4 games he missed. Lowering the sack count and keeping him healthy is priority #1, so the Titans selected Jack Conklin to add to their now expensive offensive line (3 top-11 picks in Conklin, Chance Warmack, and Taylor Lewan). On paper, the blocking should be much better.

By default, so should the running game. Can you name the running backs for the Titans last year? Exactly, they were terrible. To fix that, they traded for DeMarco Murray and drafted Derrick Henry. The Titans, unlike the Eagles, are going to play to Murray’s strengths with a power-blocking scheme so that he can regain his 2014 form. If that happens, Mariota will absolutely take less sacks and have a better chance of staying healthy.

As for receivers, TE Delanie Walker is the most notable name, and he will again serve as an important security blanket. The Titans failed to add any big names on the outside, and will be relying heavily on a big improvement from second year wideout Dorial Green-Beckham, as well as a resurgence from Kendall Wright, who had a very “blah” 2015 season.

Defense: While the Titans drew praise for trading out of the #1 overall pick, they missed out on Jalen Ramsey, and subsequently did not draft a cornerback until round 5. They signed Steelers retreads Brice McCain and Antwon Blake, and are going in to the season as of now with Jason McCourty and Perrish Cox as their starting corners. McCourty is not nearly as good as his twin brother, Devin McCourty, and Cox is even worse. Needless to say, the Titans are again going to have a lot of trouble covering opposing receivers (gave up a 101.3 rating to opposing QBs last year). They did find an upgrade at safety, as Rashad Johnson and his good coverage skills will replace Michael Griffin’s corpse.

The front seven is much better. For one, the Titans gave up a repectable 3.9 YPC average on the ground last season. They also collected 39 sacks, which is impressive since they went 3-13 and were often playing from behind. Brian Orakpo, Jurrell Casey, Avery Williamson, and Wesley Woodyard all played well. This year, the unit as a whole should improve. All seven starters from last year are returning, while second round picks Austin Johnson and Kevin Dodd will improve depth. Dodd especially will be valuable as he can play both 3-4 defensive end and outside linebacker. The Titans have a good, experienced defensive coordinator in Dick Lebeau. If the Titans aren’t playing from behind so often, and the offense stays on the field longer, this unit should be able to at least partially mask some of the weaknesses in the secondary.

Special Teams and Intangibles: The Titans had big issues covering kickoff and punt returns last season. On kick returns, they surrendered 27.2 yards per return (2nd worst in the league). On punt returns, they gave up a 78 yard touchdown 12.9 yards per return (again 2nd worst in the league). Hopefully, the Titans don’t have to punt as much this year, but this is still something that needs to improve.

Ryan Succop is a pretty good kicker. He went 14-16 last year, with his 2 misses being from over 50 yards. He did miss 2 extra points though. Brett Kern has had to punt quite a bit the past few years (88 times each of the past 2 seasons). He does a good job though. Last year he had a 40.8 net average with 34 punts inside the 20 yard line.

Going 2-14 and 3-13 the past few seasons will wear hard on your fans. Because of this, the Titans don’t currently have the best homefield advantage, going 1-7 last year. However, only 2 of those losses were blowouts.

The Titans have a 0.473 strength of schedule, but unfortunately for them, most of their winnable games (Lions, Dolphins, Chargers, Bears(?)) are on the road. The only home game they absolutely SHOULD win is against the Browns, though I think they could steal a home win or two (or three) against the Raiders, Broncos, Vikings, Packers, and the other AFC South teams. 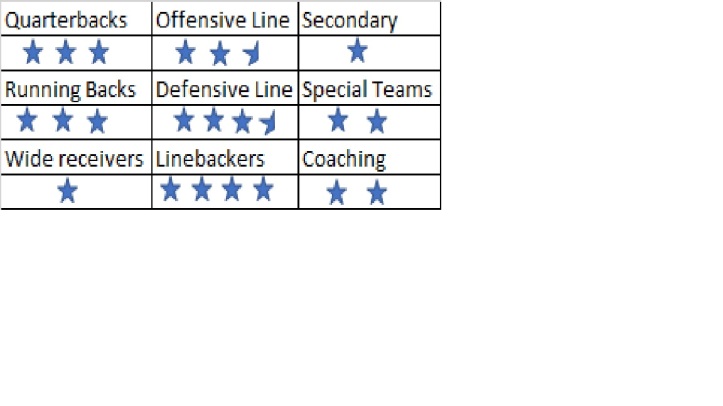 Summary: The Titans are a team on the rise. Their offense will be better this year, and I think they will score a few upsets against teams they “shouldn’t beat”. However, it is impossible to make up for all of their glaring holes in one offseason. Their receivers and secondary are still big weaknesses, so that, along with the AFC South quietly becoming one of the best divisions in the NFL, will keep them out of playoff contention.